This website uses cookies to ensure you get the best experience on our website.
Thank you for your support!
Active CMS Builder
kpcyarn | our journal | Talking Textiles | Talking textiles : Inge Jacobsen

Artist Inge Jacobsen is based in West Sussex in the south of England. She was born in Ireland to an Irish mother and Danish father and when she was six her family moved to Denmark, where she spent most of her childhood.

When she was 13 she re-located to the UK where she did her secondary and University education. She went to Kingston University in London where she began studying Fine Art, but later switched to photography. “I didn’t have much interest in taking photographs while on that course - and ended up only using my camera a handful of times, but the theory and the photographic image really interested me,” Inge says. 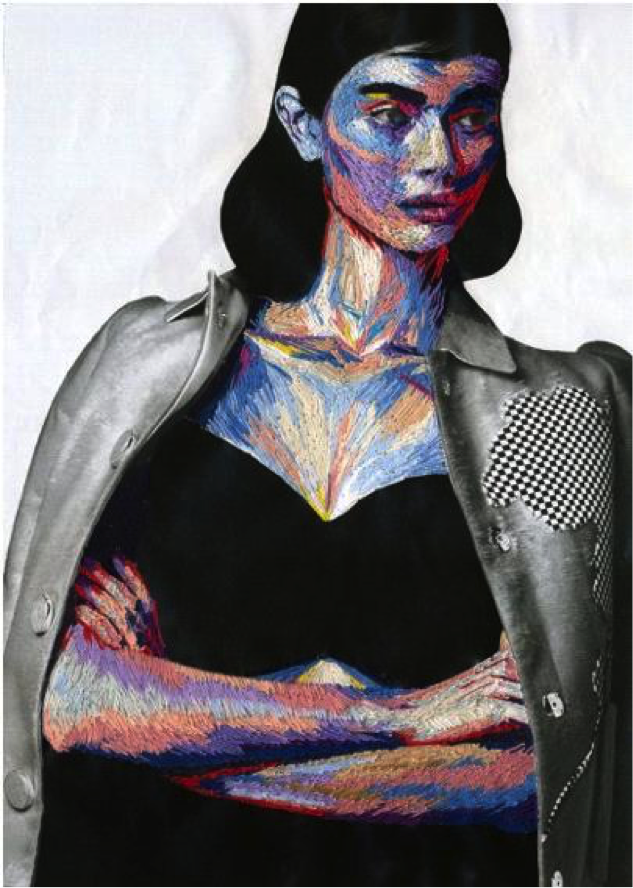 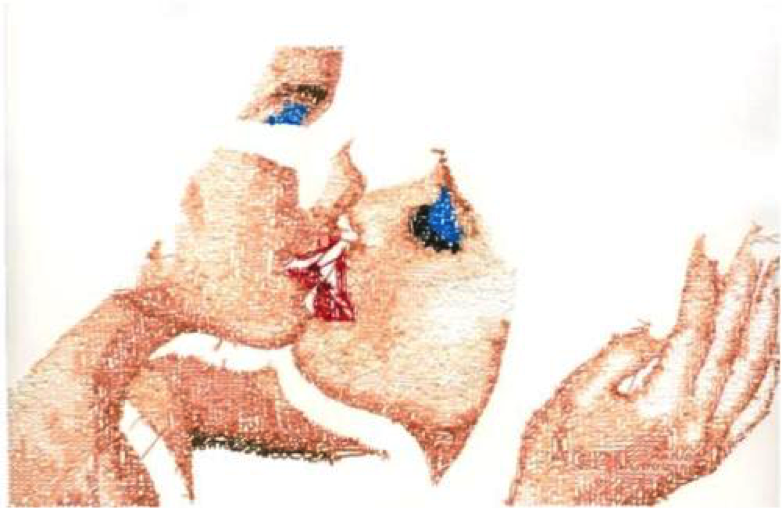 She graduated in 2011 with a BA hons in Photography.

Before graduating her work was seen online by a blogger who subsequently interviewed her for their website. After that, a number of other blogs picked up on her work and within a month she received an interview request from British Vogue for their website.

Describe how you work with textiles:

I mainly work with stranded cotton thread on paper. I find commercial images, predominantly from fashion and culture magazines, and work into them with the thread. This involves cross-stitching over the original image and appropriating it. 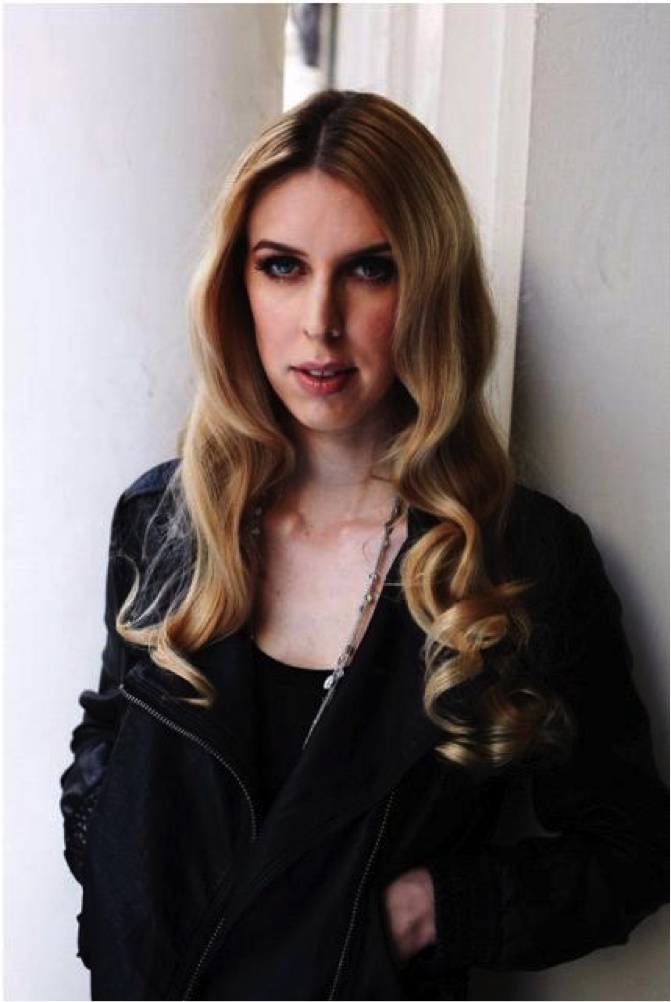 A pivotal moment in your early career:

Being interviewed by Vogue was a really big deal. I had often used their magazines in my work but I also collected them and enjoyed flicking through them as a teenager. It opened up a lot of opportunities for me within the fashion industry. 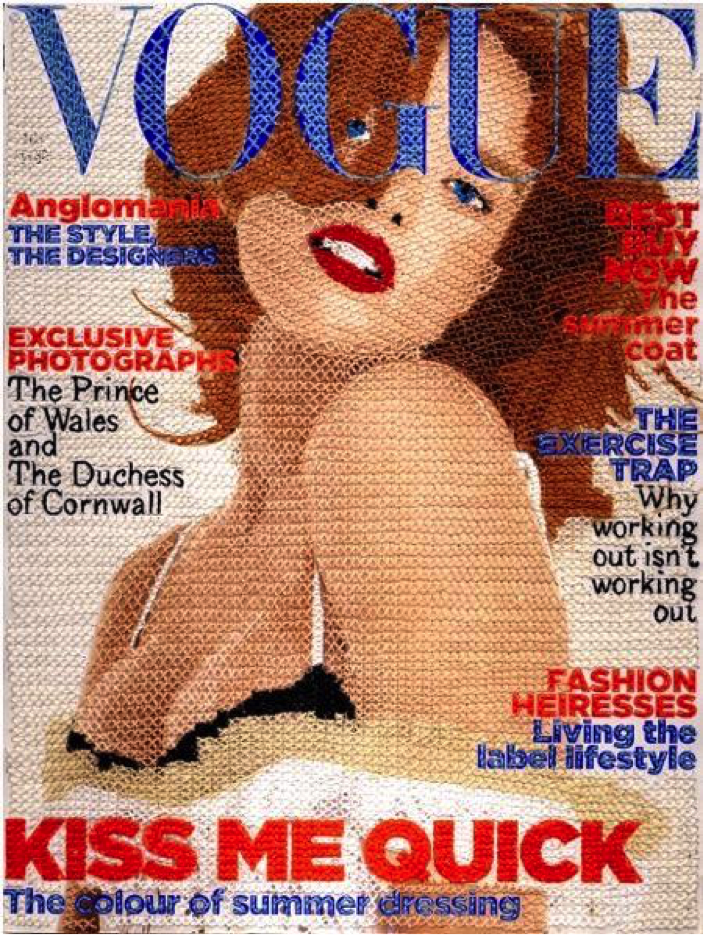 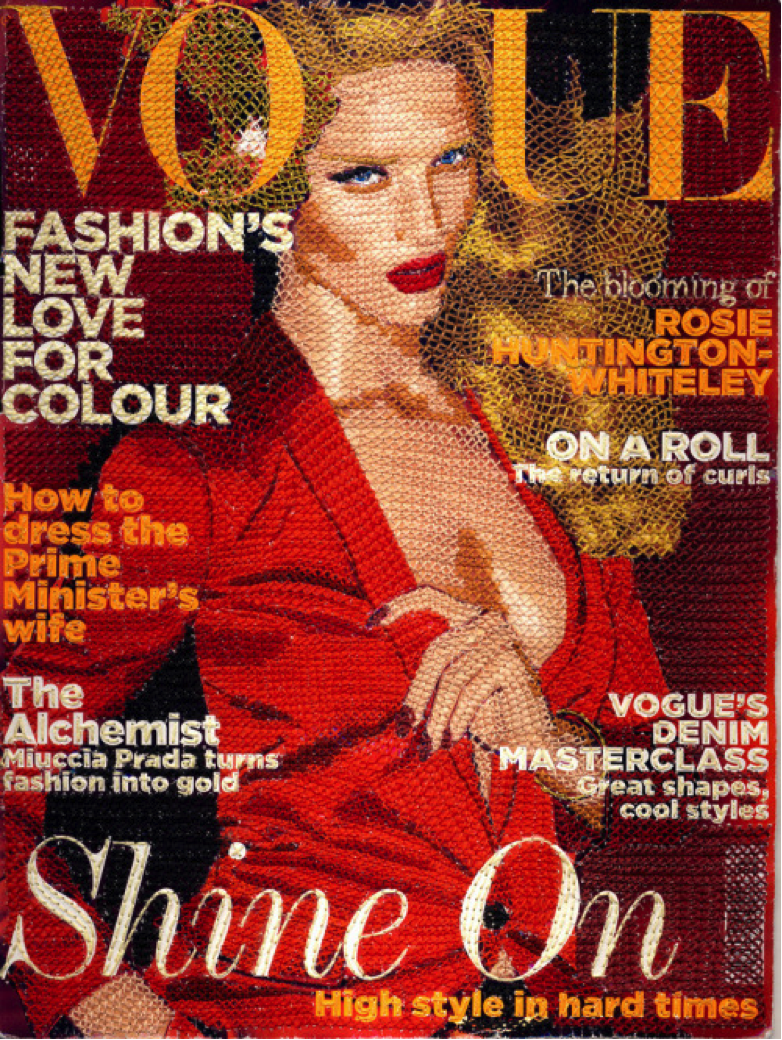 Did anything in your childhood influence what you do now?

Yes, my Danish grandmother taught me how to cross-stitch and knit – although I’m not the best knitter. I also learned cross-stitch going to school in Denmark. It features heavily in a lot of Danish furnishings – particularly at Christmas time.

The professional achievements you are most proud of:

I am proud of all of my professional achievements as they have all been very different. But some stand out moments were; winning the Directors Purchase Award at the Cork Street Gallery exhibition in London – it was a great moment for me as it was the first award I had won.

I am also particularly proud of the collaboration I did with Georg Jensen. They are such an important part of Danish design history and it gave me the opportunity to work with the Royal School of Needlework at Hampton Court Palace. 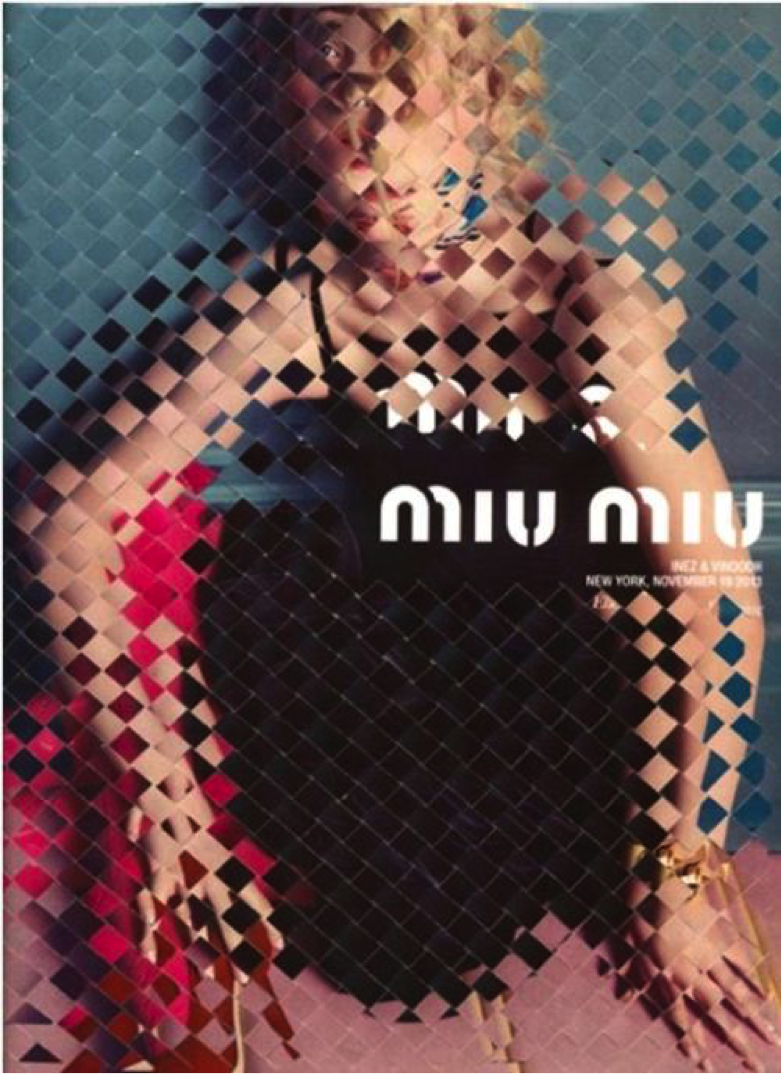 Is there anything you wish you’d known when you were starting out in textiles?

That long threads do not make for quick or easy work – quite the opposite actually. When embroidering or cross-stitching (by hand) use shorter threads - it looks much better and saves from de-tangling and unknotting threads. I learnt this from working at the Royal School of Needlework.

Why do you think wool/handmade textiles are so fashionable right now?

I’m not sure – art and fashion have their trends and I think the handmade is back in style. The readymade object and conceptual art has been so popular for so long, perhaps people just wanted something different? Perhaps they are nostalgic for the days when artists, not studio assistants, made art.

What is your dream textile project - please describe?

My dream commercial textile project would be to work with brands such as Valentino, Dolce and Gabbana, Chanel, Louis Vuitton or Prada – I would love to collaborate on an advertising campaign with them using my signature thread style.

As for a non-commercial project, I once created and stitched a quilt from paper. I would really like to create a whole set of home furnishings made from paper - completely un-usable – and display them in a gallery.

Which artists who work in the wool/textiles field have inspired you? 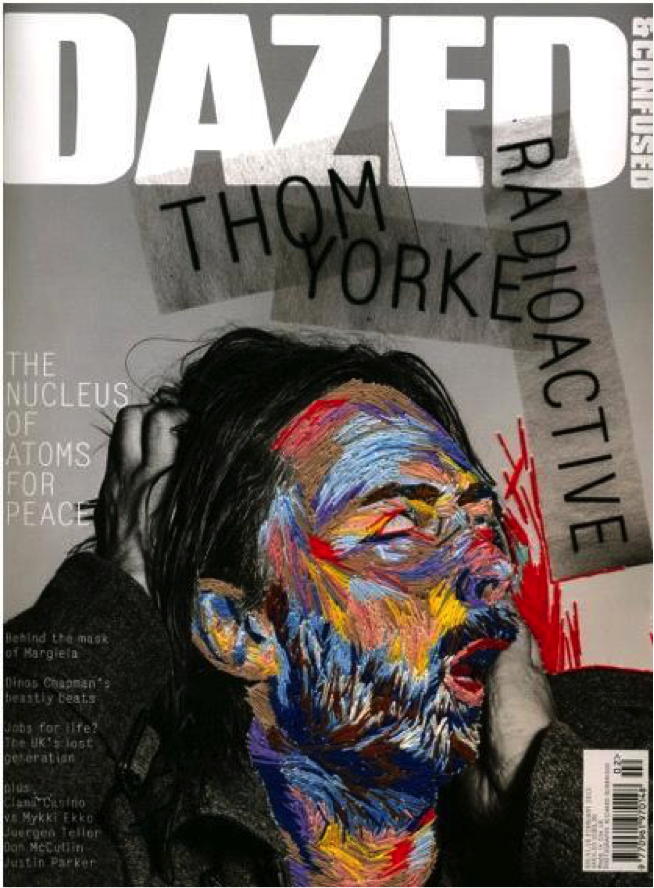 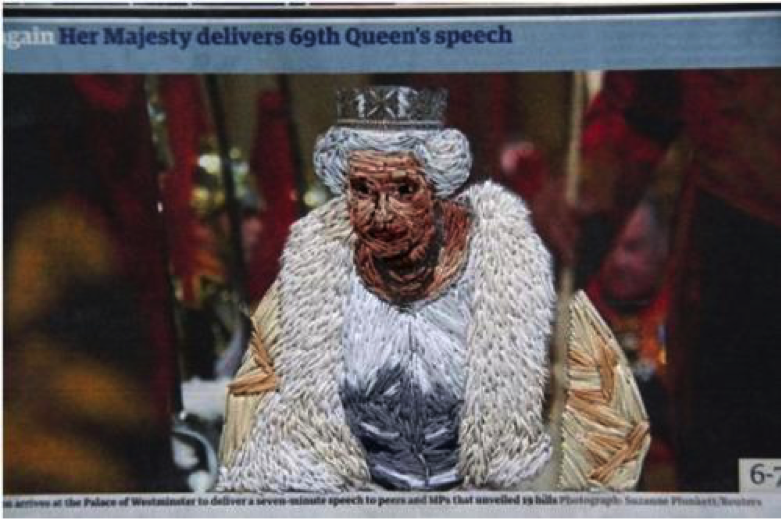 What is your favourite woollen/cotton item in your wardrobe or home and why?

A cotton Valentino top I bought when I was younger– It was the first ‘designer’ item I ever owned as a fashion obsessed teenager.

My workspace is a desk in a small room – I am very untidy so there are boxes full of embroidery thread stacked around the room along with stacks of fashion magazines. 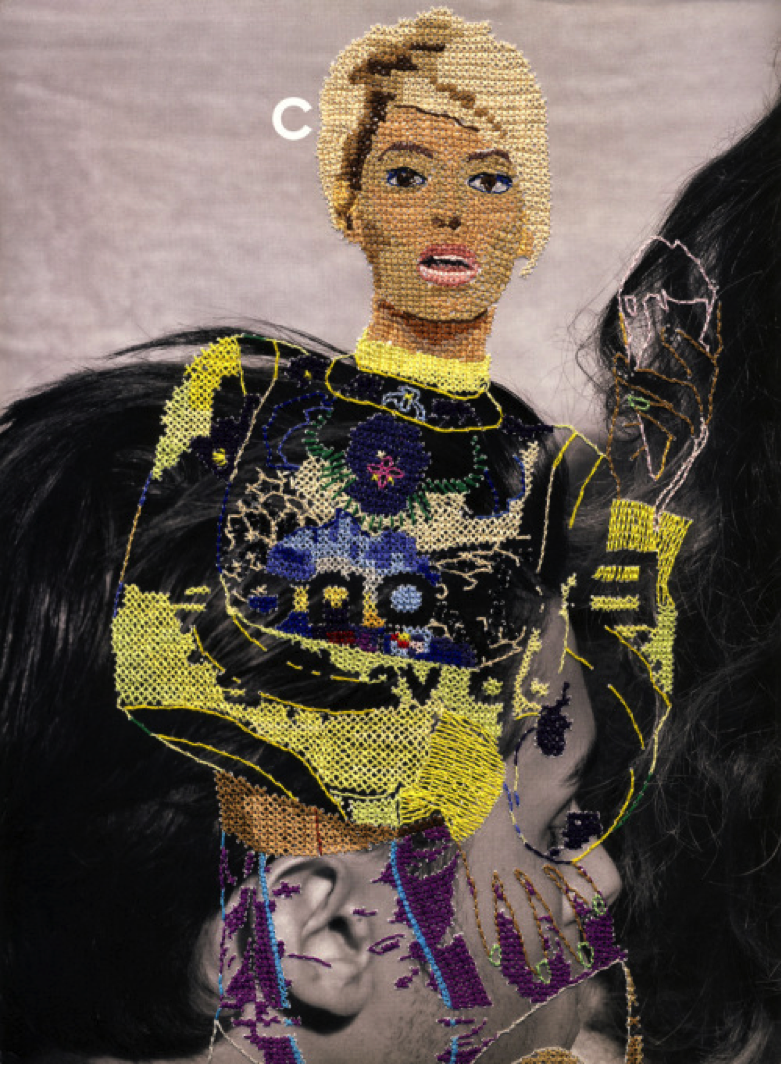 Cross-stitching was a where I started – I used to get packets I bought in hobby shops when I was a kid.

The KPC Yarn hue that speaks to you and why:

The Gossyp Pomegranate is my favourite – it’s such a beautiful rich colour – it just pops!